4.1      Staverton or otherwise “Stave Town” as referred to in the Doomsday Book took its name from the compounds). The town became established on high ground around an Anglo Saxon Burial Ground and then the early makings of the Anglo Saxon Church (c800AD).

4.2      Mid-way between the Shire Towns of Northampton and Warwick, the settlement was well placed for its trade. The well-trod road through the Town later became known as the Portal Road as the road between the respective portcullis of the two castles built after the Norman invasion.

4.3      As well as the Church perhaps the oldest remaining building in the Town is part of the Manor House which although reduced in stature still retains an Anglo Saxon Cellar and remnants of the house that previously stood on the same footprint.

4.4      The settlement developed and grew predominantly supported by the agriculture in the surrounding fields. Evidence of substantial ridge and furrow can still be found in the former open ground of the underling fields.  Apart from a few outlying Farmhouses and yards, the Town formed a hub of as many as 12 Farmhouses, each with their own yards, outhouses, paddocks, orchards and farm cottages, along with several small holder’s homes and yards. Some of these original buildings still remain, all be it converted in to modern homes. Their construction in local Jurassic Lime Stone and sited on the shallow rock of the natural terrain forms their sound foundations. Although older examples still exist, the majority of these remaining buildings were built c1500/1600 with several additions just after the end of the English Civil  War.  It is apparent that the then Farmers enjoyed an element of wealth which is evident from individual surviving architectural features, not least of which are various examples of stone oriel widows.

4.5      The Town by now referred to as “Staton” or “Statun” perhaps with a silent second “t”, extended to the north of the Church with a collection of dwellings and hovels where, “Upon a Tuesday in 1720 between the hours of 12 and 1.00 at night there happened at this town a sudden and dreadful fire attended by a very strong southern wind, and continued vehement and extreme for about 3 hours. It began at the south end of the town, destroying all before it, consuming 22 dwelling houses besides ricks of grain, barns, stables, outhouses, and other buildings and in all probability had destroyed the whole town but for the hasty but happy falling of a shower of rain upon the virulency of the wind ceased and the rage of the flames abated”. The fire was estimated to have caused damage to the extent of £3,000. Following this event, the area in question was not redeveloped and the populous were all relocated within the Hub where it remains today.  Evidence of the ruins left from the fire can still be seen in the North wall of the Church Yard, the West wall of the former Home Farm Yard East of Daventry Road and in the open fields adjacent to the Church.

4.6      Although the Town had previously enclosed itself with various ancient enclosures around its periphery, the Enclosure Act of 1773 and the consequently enclosure of the entire Parish brought about a considerable change in the farming community.  Ownership of land became secured and the farming activities of the smaller farmer became relocated and consolidated to a specific location in lieu of their scattered holdings throughout the Parish.  The renewed prosperity that followed over the next century or so established a number of Historic Parish Charities for the benefit of the less fortunate.  Funded by the endowments of former inhabitants they provided, fuel for the poor, support for those in need, and the beginnings of education for the young.  Although now amalgamated, several of these charities remain active today in the bodies of, the Staverton Education Foundation, the Reading Room Trust, and the Staverton Relief in Need.

4.7      By the end of the two World Wars the Town (now called a Village) had evolved to rely less on Agriculture and more on the developing neighbouring Industry.  1950 onwards saw the building of the several then Council Houses in the Village to house many of the growing local population.  Around this time came the main drains, running water and street lighting.  Since then the Village has successfully absorbed a further amount of ‘in character’ natural growth as a restricted infill Village.  In addition to this many of the former Farm yards have successfully lent themselves as small developments of either tasteful new houses or the conversion of the original farm buildings which remain in keeping.  A practice that the village would wish to retain.

4.8      There is too much Village History to give justice in these few pages.  The overwhelming charm of Staverton has been its sense of well-being both in its architecture, its tranquil location in its surrounding countryside and its charity to others.  A pleasant village community.

4.9      Since that time the Village has successfully absorbed a further amount of organic growth, as  a restricted infill Village. There are a number of examples of moderate growth that have taken place over recent years. In 1984 three 3 bedroom terrace Cottages and one 3 bedroom semi-detached house were built in Glebe Lane. Church Fields was built in 1987 and consists of five 4 bedroom houses, with one 5 bedroom property. Windmill Gardens was built in 1997 and consists of two 4 bedroom Dormer Bungalows, One 4 bedroom Barn conversion, and four 4 bedroom houses. In 2003 one 6 bedroom house and one 4 bedroom house, were built on Daventry Road, in part of the former gardens of Vine Tree House. In 2008 a 3 bedroom detached property was built within the grounds of an existing property in Manor Road. Also in 2008 a 2 bedroom Bungalow was built within the existing grounds of a property in Home Close. More recently in 2013 a 3 bedroom Bungalow and 4 bedroom house were built on the brown field site of an unused metal works, on Daventry Road. All of these developments were designed to blend into the character of the existing village, being predominately built in stone, or high quality brick. The small nature of each development has ensured the successful integration of new residents, and the diversity of design promotes sustainability by providing housing to meet a range of existing and future needs.

4.10    Our village today is very much a community with its own character in beautiful rural        surroundings 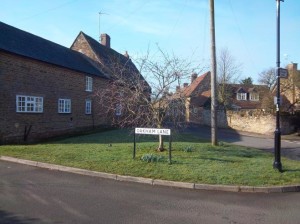